This might surprise readers who are accustomed to traditional version control systems like CVS or SVN. A git repository can be a completely local undertaking. The whole repository content is stored in a folder named .git in the root of the project folder:

Of course git can also work with remote or central repositories, but it does not require them. We will have a look at working with remote repositories in a forthcoming part of the tutorial. For the moment let us enjoy the freedom of creating a repository locally whenever and for whatever reason we may need one!

Your own files in the repository folder are called working tree:

Git internally holds a thing called the index, which is a snapshot of your project files. After you have just created an empty repository, the index will be empty. You must manually stage the files from your working tree to the index using git add:

The same applies if you change a file in your working tree - you have to add this change to the index with git add:

It’s important to realize that the index is a full snapshot of your project files - it is not just a list of the changed files.

git commit takes the contents of the index and creates a new commit:

Committing is a completely local operation, not related to sending something to a remote server. It just takes the contents of the index and keeps a snapshot of your project files as they were in the index:

Similiar to the index a commit is a full snapshot of your project files. Different from traditional version control systems, commits are not numbered. Instead, a commit gets assigned a SHA-1 hash of the snapshot contents:

This may look awkward the first time you see it. But it brings a huge advantage with it: every commit, which is a full snapshot of your project files, is identified by a cryptographically tamper-proof signature of your file contents. If somehow one byte of the contents or history of your files changes, you would end up with an entirely different hash. So you’re guaranteed to get out what you put into a git repository.

Also, you don’t need to write the full commit hash when you want to refer to some specific commit - you can always abbreviate them by their first characters. The first seven characters are usually enough to identify one commit uniquely.

The workflow for editing files in a git repository looks like this:

As you do this repeatedly, you will create a new commit each time, pointing back to the previous commit:

This is how git keeps track of the project history. It stores snapshots of the project files as commits. These commits point back to the commit they were created from. Of course, all these snapshots are saved in a very efficient manner occupying only a fraction of disk space compared to a full copy of all your files.

git can also show a shorter version of the history using:

If you look at the full commit messages above, you will see that they contain information about their author. Where does git take this information from when it created the commit? Initially, it tries to guess these from your username and hostname. You can also configure them for your project manually:

You can also configure this globally for all your git projects:

Seeing what will be committed

At first, you will see the changes that were already added to the index. This list represents what will be in your next commit:

Changes to be committed:
modified: changed_file_added.txt

Also, git will show the changes that have been made to the working tree, but were not yet added to the index:

Shortcut: How to add changed files when committing

When committing, you can leave the task of adding the changed files to git using the -a command line option:

This will add all changed (but not new) files to the index before committing.

What if you made some changes to your project and want to return to the original state? This depends on where the changes are.

If you have not added them to the index yet, you can restore them from the index using git checkout <filename>:

This restores a file or a folder as it is stored in the index to your working tree:

What if you have already added the changes to the index? You can restore the index to the last commit using git reset:

You can also restore the whole index:

HEAD always refers to the last commit which has been made. Using this, the index is restored to the contents of the last commit - you can then use git checkout to restore your working tree as well: 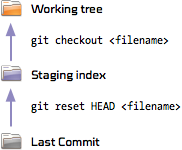 If you have already committed your changes, you can make use of git’s built-in “undo” command called git revert <commit>:

This will create a second commit which undoes the changes of the given commit:

Please note that you can also revert older commits:

However, reverting older commits can cause a conflict if the other commits changed the same contents in the meantime. We will see how such conflicts are resolved later on.

Seeing the diff between commits

To see the difference from one commit compared to its parent, use git show <commit>:

To see the diffs for the complete history, use git log -p

Many commands like git status and git diff can show colored console output, which helps reading their output. You can configure this globally using:

git tag <name> <commit> assigns a tag to a commit. If <commit> is omitted, the last commit gets tagged:

A tag is nothing more than a label that can be used to refer to the tagged commit:

Tags can be used everywhere where you can use the commit hash, for example in git diff:

Tags are perfect for labeling specific points in the history. It is very common to label commits with the version number when you publish a release of your project - this way you can find these important commits easily:

So far we have seen how you can create commits and work with them. Up until this point, all the history of our repository has been linear.

Let’s say we we want to develop a new feature for our project. This is something very large and we want to keep those changes separate from other changes. With branches, we can do that.

All the time, we were already working in a branch called master. This branch was created automatically when we created the repository. You can see all branches in the repository using git branch:

So there is one branch called master. The asterisk denotes that this is the branch we are working on. A branch can be compared, to some extent, with a tag. At all times, a branch points to some commit, in our case to the latest commit we made. You can prove that using:

To track changes in a separate branch, we have to create a new one using git branch <name> <commit>. The specified commit will be the starting point for the new branch - if you omit it, the latest commit will be used:

This will create a new branch called newfeature based on the latest commit in master:

At all times, there is one specific active branch. If you call git branch, you will see that a new branch named newfeature was created, but master is still the active one:

You can switch between branches using git checkout <branchname>. This is the same command we used before to get files from the staging index to the working tree. The meaning of git checkout depends on its arguments.

Now the active branch in our repository is newfeature:

We can start working in this branch using the already known commands git add, git commit, etc. Let’s see what happens when we create a new commit in the branch:

The commit was added to the repository and the branch newfeature now points to the new commit. Conceptually a branch can be seen as a pointer to some commit. Whenever you commit something, this “pointer” of the active branch is moved forward to the new commit. This is everything it takes to keep branches separate.

This will set the active branch back to master. It will also reset the index and your working tree to the contents of the last commit in master: 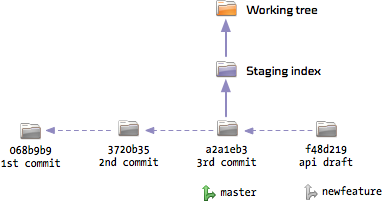 So you will see the project in the exact same state it was in when we forked off the new branch. There will be no trace of the changes of the newfeature branch.

What happens if we add some changes and commit these?

The same as before: A new commit will be created based on the latest commit in master and master will be pointing to the new commit after that:

Branches are very cheap and fast in git, you can create as many as you need. Some developers like to work with a stable and an unstable branch whereas some developers create a branch for every new feature they are working on - it’s up to you.

Let’s say we have completed the new feature and want to get it back into the master branch. This can be achieved with the git merge command whilst having the master branch selected as the active branch:

If all goes well there will be no conflicts and git will just create a new commit containing the changes which have been made in both branches:

Generally, git is very smart about merging. However, if the same contents were changed in both branches, a conflict will arise:

You have to resolve this conflict and remove the markers. After that you add the file to the index and commit the result:

After you have merged the branch, you can delete it should you not need it anymore:

You could also continue working in the branch and later merge it again. git will be smart enough to know that parts of the branch have been merged already and will only apply the new changes.

Some versioning tasks can be performed in a simpler manner using GUI applications. git comes with the history browser gitk: 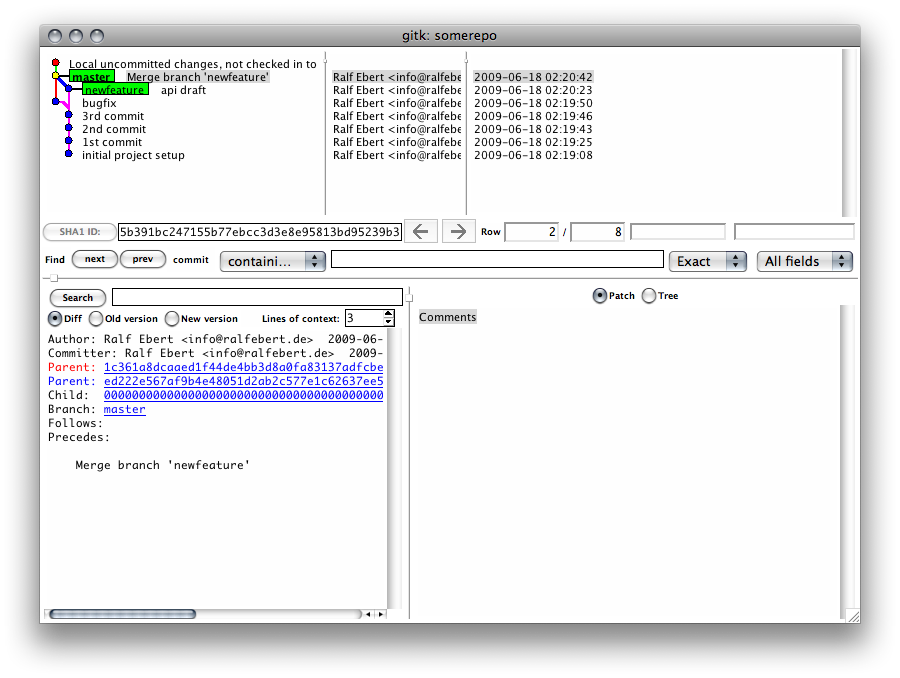 For staging changes and committing you can use git gui: 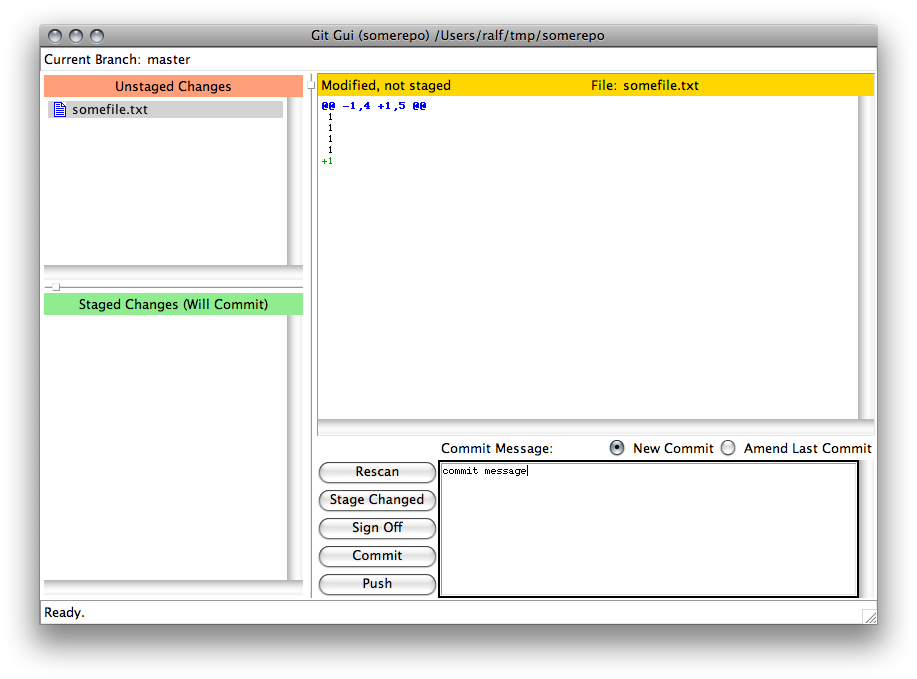 These tools are not pretty, but they do their job very well. Mac OS X users can use a nice alternative application for both tasks called
gitx 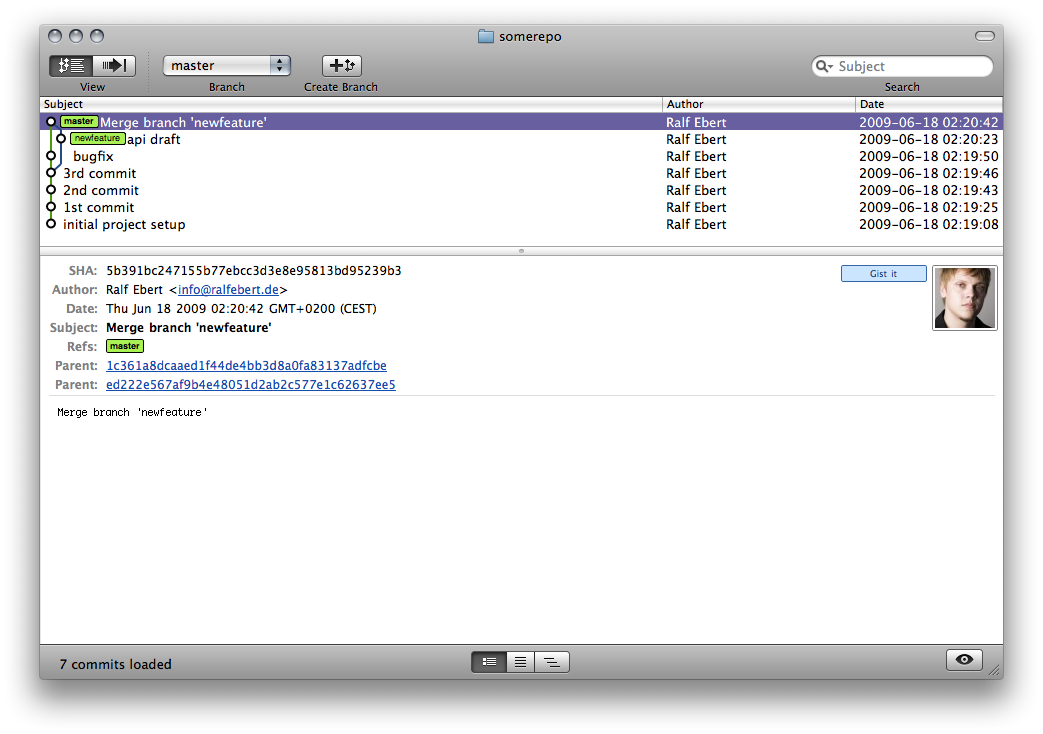 From here you can search these documents. Enter your search words into the box below and click "search".